Airports are like malls: it’s scientifically proven the second you step foot in either of these buildings, you immediately lose 15 IQ points. There isn’t much I hate more than flying. It’s probably the only thing I both despise and routinely subject myself to. I don’t mind the actual experience of being in the plane, it’s just every other aspect of flying.

How I solve my flying woes

TSA Precheck
Thanks to all the hours I have dedicated to being in the sky, I usually get Precheck — I’m allowed to leave my laptop and liquids in my bag, and I don’t have to take off my shoes. Seems great, right? Too bad some genius decided to grant Precheck to two kinds of people: those of us who fly all of the time, and really, REALLY old people who have no idea WTF is going on. What a great plan! Combine the most efficient flyers with the most inefficient flyers, and put them all in a special line together!! It’s embarrassing for one group, and frustrating for the other.

Overhead Bins + Late Arrival = Meltdown
There are two reasons I board the plane immediately: one, so I can have overhead bin space. Two, so I can sit in my seat and sip on a gin and tonic while watching my fellows passengers have total fucking mental breakdowns when their luggage won’t fit, instead of standing behind them. Without my calming cocktail, I will definitely run commentary.  Also, no, you cannot take other people’s shit out of the bins to make yours fit. I sincerely wish I was a thief so I could steal shit from people who put their bags at the front of the plane, no where near their seat. Good job, asshole. Now you’re blocking space for people sitting in the section your shit is in.

If you’re a frequent flyer, you check your bag for free. If you are a once a year vacationer, just pony up the $50 round trip and check a single bag for your entire family. Or — and this is going to be shocking advice — if you have a rolling suitcase, make sure it isn’t fucking huge. And hasn’t everyone at some point done a puzzle? Why do people insist on putting luggage in the bins in a way that takes up the most possible space? Oh, probably because they are the same selfish people that are guilty of….

Middle seat, IMO, gets priority to the armrests. Even if you don’t agree with me, the human in the middle seat isn’t a post for you to lean on. GO AWAY.

DO YOU KNOW WHO I AM?!
This is the worst person at the airport — at least I can chalk a lot of people’s behavior up to not knowing WTF is going on at the airport. But the DYKWIA person…they make sure you know they fly. Do I know who you are? Yes. You are a fucking asshole. BYE FELICIA.  And since I am so young and yet fly so often (and I don’t ever dress up to fly, because f that), I feel like the DYKWIAs really just gravitate toward me. I’m constantly being told by other customers that I’m in the wrong line, whether it’s check in or boarding. I’m sorry, did you get your elite status because you volunteer as the fucking line police for the airline?  Fuck. You.

Last December my best friend and I went to Miami together. We got a complimentary upgrade to first class for the return FLL – DCA flight. They called for first to board, so we…went to board. My ticket was scanned without problems, and then suddenly this dude just barreled past my friend and shoves his ticket in the GAs hand.
GA: Sir, what are you doing?
DYKWIA: I’M FIRST CLASS.
GA: So is she [points to my friend].
DYKWIA: Oh. Oh. Go ahead.
My Friend: No, it’s okay. You can go.
Meanwhile, I’m just standing there watching all this happen thinking what the fuck is wrong with people. WE WERE STANDING IN THE FIRST CLASS/ELITE LINE. I’ll be damned if I’m trading in my standard flying attire of cowboy boots and leggings so people don’t act like assholes to me.

Then there is the credit card holder DYKWIA. This person doesn’t actually fly often, but they do pay $95 a year in fees and a high APR to get some of the perks of frequent flying. When I moved to Dallas, I bought a one way first class ticket for about $300 — it was cheaper to do it that way and get 3 free checked bags than it was to book the regular fare and pay for my 3 bags ($25, $35, and $150, respectively). There I am, the day after Christmas, hungover out of my mind, hiding behind a big fluffy coat and sunglasses, moving halfway across the country to a city where I don’t know anyone. This dude with his family is in front of me in line to board the plane, and the GA takes his boarding pass and says, “I’m sorry, sir — we’re only boarding first class pax now.” The man proceeded to lose his fucking mind. I shit you not, he actually said, “DO YOU KNOW WHO I AM?! I HAVE A CREDIT CARD WITH YOUR AIRLINE.  I GET TO BOARD EARLY.” The GA agreed that yes he did, but after first class. “SO BECAUSE I DIDN’T PAY ALL OF THAT MONEY FOR FIRST I CAN’T GET ON THE PLANE NOW?” And then he pointed at me! Poor, hungover, trying not to vomit on him, me.
DYKWIA: Did you buy a first class ticket?!
Me: Yes.
DYKWIA:  BUYING A FIRST CLASS TICKET IS STUPID.
Me: Paying an annual credit card fee is stupid.
I don’t think I helped the situation, but I got to go sit down in my stupid seat…and no one asked me to sign up for the CC on my flight.

Lap Children AKA Feet in YOUR Lap Children or Floor Children
What a cute baby you have! He’s so big for his age. I’m so glad that on this 3 hour flight you’ve decided to keep him on your lap even though he doesn’t fit and is blatantly too big. It have never, ever been stuck next to a lap child, but I have definitely seen them next to others when the child was too big for a lap. In fact, the first time I went to Dallas, I went on vacation with my best friend (we travel). We got stuck because Sandy shut down the DC airports, and were able to manage two spots on the first post-Sandy flight out of DFW. My poor best friend got stuck next to a lap child that was way too big for his  mother’s lap, with the child’s entire head hanging over onto my friend’s lap. Taking into account the storm situation, and because she is a saint, she didn’t say anything to anyone. I would have lost my fucking mind.

Before you bring a lap child on a plane, think about whether you really want to sit with a child on your lap for hours. You fucking don’t. How do I know? Because I have seen children who were clearly too old (2) be forced to be lap kids, and they end up spending their time running amok or playing on the floor or bothering other pax. Look, you have a kid and that’s cool. I don’t want to talk to you or your child. Just get them a fucking seat of their own.

Gate Lice
Do you think if you get on the plane first, something magical happens? Do you think that the first people on the plane get free hookers and cocaine? Do you think you get an award because you’re zone 5 and you got on the plane with zone 1? Do you think they don’t let you on if you’re not crowded around the gate? No? Then why are you crowding the gate when you’re in the last zone to board?  Look, just back the fuck off until you’re supposed to be boarding. “Oh, they said they’re starting to board anyone who needs assistance!! Better go make my presence known at the gate since I’m in zone 6! Six sounds like I’ll be first, right?!” NO. All you’re doing is being in the way of everyone who is supposed to get on the plane before you. At least wait until the zone before you is being called, instead of jumping 7 steps ahed.

THIS IS YOUR FAULT
Flights get delayed, plans get changed. It sucks, I know. Lost luggage, canceled flights, hours on the tarmac — I’ve been there, it blows. But do you know who isn’t responsible for any of those things? The person you’re interacting with at the airport. You know that dreaded moment when you’re on the plane, waiting to go, and then they decide to deplane? Suddenly your fellow pax think they’re in the Hunger Games, using their lap children and giant rolling suitcases as weaponary to push others out of the way, all in the quest to be the first person to talk to the GA. Since I don’t carry more than a bookbag, I usually make it off the plane pretty early. Not too long ago I was third in line after a deplaning. Only one GA was working to reschedule us, and the people directly in front of me were, quite frankly, evil. It was a man and his teenage daughter, and they were BOTH loudly complaining about how inconvenienced they were, how slow and bad at her job the GA was (they kept pointing at her!), and how they were NEVER FUCKING FLYING US AIRWAYS AGAIN. Everything was said loudly, and the GA and every other person in a 20  foot radius heard them. They were pretty much running their own sitcom routine, except not funny. It took almost all of my strength to not record them. Instead, I behaved like a normal, rational person and looked up another flight on American that would get me where I needed to be.  Like, is it rocket science to realize that being an asshole will get you nowhere, and being responsible and polite and presenting a solution will get you to your destination faster?

I have to go take a Xanax now. I’m upset just thinking about it, and I don’t even have to fly again for like 2 more weeks. 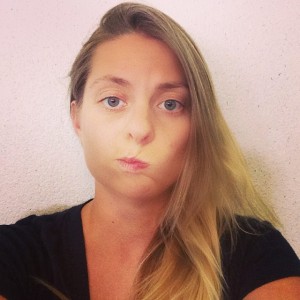 This was a pretty busy week for the news, but most of it has been depressing.

Here is a lesson in traveling etiquette: the middle seat gets both armrests. At the very, very least you don’t LEAN OVER SOMEONE ELSE TO WATCH YOUR IPAD. I mean, the aisle is on the other side of you! Lean over toward that!! You, sir, are an asshole. At least the TSA only looks and (typically) doesn’t touch!!!

My plan of action, giving that pointed elbow jerks aren’t working, is to lift my arms above my head and rub my armpits on him while fiddling with my light.