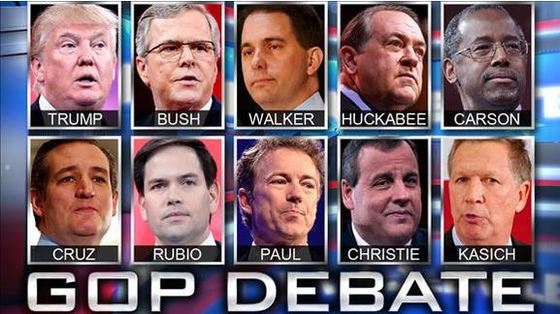 …and there are legitimate candidates for President who’d rather I be dead than aborting!

Gosh, nothing puts me in a better mood than watching 10 guys on a stage try to out-brag each other about how  much they hate women’s rights. What a blast the GOP debate was, with each contestant trying to demonstrate his regime had done more to harm Planned Parenthood. What a thrill ride!

There are so many problems I barely even know where to start.

First, we have the conservative idea that government should play a minimal role in our lives — and as a libertarian, I completely agree! That being said, this isn’t the way to do it. The funding that Planned Parenthood receives is more or less minuscule in the grand scheme of things. I can’t speak for all of us, but a large part of what made me begin to identify as libertarian was the stance that once we cut back on taxes and overbearing government red tape, people who can help out will help out.  Cutting something that receives such a tiny amount of the budget (whether at the state or local level) doesn’t translate to people seeing the benefit in their pocketbooks and take home pay; in turn, that doesn’t translate to people having extra money to donate.

I’m not saying the idea to take federal funding out of social welfare programs is wrong; I’m saying the order in which programs are being de-funded is reprehensible. $528 million to subsidize Planned Parenthood in their 2013-2014 fiscal year isn’t so bad when you consider $146 million went to building fucking sports stadiums (which doesn’t help the economy, sorry) or that $3 billion went to testing golf clubs and conducting elementary school experiments in space. So why are we really crying about women’s health services?

Then there’s the whole abortion debacle. The fact that abortion is still a political issue completely blows my mind, yet there stood crazy ass Huckabee, telling us that a fetus needs the same rights as US citizens –I thought you had to be born or naturalized to be a US citizen, but what the fuck do I know? I’m just a woman who was actually born in the US, no need for me to have rights.

Of course, Trump was there to add his meaningful opinion on abortion. He said knew someone who almost got aborted but is now “a superstar.” What the fuck are you even talking about? Not only does that sound suspiciously like the nonsense Christian rhetoric of “what if Jesus [Christ, Superstar] was aborted?” it also isn’t relevant. Does everyone who knew Jeffrey Dahmer now have an ace in the hole argument for mandatory abortions?!

I’ve written before about how I don’t want kids, but I want to be pretty clear: that isn’t a passive feeling that will be overcome by the grace . I mean if I get knocked up, the parasitic clump of cells WILL be disposed of. Just will it be under the eye of a doctor or on the steps of congress as I stab my uterus until I die?

I can afford to go to another state or fly to Canada, and the idea of bullshit waiting period laws keeping me from being able to immediately get an abortion terrifies me. No, I don’t want to be forced to see the fetus on the screen — not because it’ll make me emotional and change my mind, but because the idea of something growing in me makes me feel physically ill if I think about it too long.

If I have the resources for a round trip international flight and private doctor visit to terminate a pregnancy and I’m still stressed out, I can’t imagine making barely enough to put food in my mouth and needing to drive 13 hours each direction for an abortion with a waiting period.

What disappoints me with the anti-choice crowd is that I go out of my way to talk about the steps I would personally take to abort a child. I would 100% kill myself, and I am not suicidal. Tokophobia and depression are *real* — fucking acknowledge it. I first started talking about sterilization at 18! There are people who DO NOT want kids, who will go through any length to not have them, but it seems like the candidates on stage last night want to keep on pretending only irresponsible teenagers and hookers get abortions. They want to hear “rah rah every kid gets a chance, life is precious.” They don’t want to hear about the expectant mothers of unwanted children are depressed and miserable, about the expectant parents of unwanted children who face financial destruction. So fuck them all.

Congratulations, SCOTUS on your decision in McCullen v. Coakley, and congratulations Massachusetts, for writing your buffer zone law in such a sloppy manner, simply to “make [the police’s] job so much easier.” You have both added to the list of times history has failed American women.

First, let’s be clear: SCOTUS did not rule all buffer zones around abortion clinics to be unconstitutional (I know it’s confusing given that when you Google “McCullen v. Coakley” all of the news articles imply otherwise); they struck down the actual law that Massachusetts had in place because of its “inadequate tailoring.” Oh, and because McCullen is an old lady and played up the idea of “sidewalk counseling” instead of the violent protests that also occur in front of abortion clinics. In reality, SCOTUS determined NOTHING.

As you read through my blog and other news sources, it’s important to start with some background information instead of just learning everything we know from misleading headlines like Abortion Rights Lose a Buffer (the implication being that buffer zones themselves are always banned) and Yet Another Unanimous Judgment in McCullen v. Coakley (yes, it was a unanimous overall decision, but far from a unanimous opinion).

Since my initial intention was to write only about McCullen, I’m going to move on and try to give some information on the case and maybe even on the opinions, depending how much I rant. But have no fear, I’ll be doing a few more entries explaining the SCOTUS opinions, the differences between McCullen and the seemingly identical Hill case, and some more background information and often overlooked points on how this isn’t the only example of women getting screwed over.

But for now, here’s some information on McCullen:

– In 2007, Massachusetts revised its Reproductive Health Care Facilities Act to make it a criminal act to knowingly stand on a “public way or sidewalk” within 35 feet of an abortion clinic (excluding those inside hospitals), with some exceptions (obviously including anyone going inside the building or working there).

– However, there are situations where you free speech can and will be limited in public spaces: “Regulation of the time, place, or manner of protected speech must be narrowly tailored to serve the government’s legitimate, content-neutral interests but that it need not be the least restrictive or least intrusive means of doing so. Rather, the requirement of narrow tailoring is satisfied ‘so long as the…regulation promotes a substantial government interest that would be achieved less effectively absent the regulation.'”

– Blah, blah, blah, right? Basically, the point is that if the ban is content neutral (i.e., all opinions are suppressed in that location or timeframe), it isn’t really suppressing your free speech since no one is allowed to sidewalk counsel in that zone. The government can’t take away your right sidewalk counsel if it’s your only opportunity/outlet, and the government needs to attempt other measures or prove that other restrictions would be less effective than outright banning free speech in a public area.

So what went wrong (and right) in Massachusetts?

In the Opinion of the Court, SCOTUS disagreed with McCullen’s argument that the ban wasn’t content neutral. Banning human interaction in front of an abortion clinic, she argued, was really only affecting anti-abortion speech, making the ban automatically content based. They agreed that by nature of the arena, it disproportionately affected pro-abortion speech…but that didn’t matter. “Whether petitioners violated the Act ‘depends’ not ‘on what they say’ but simply on where they say it.”  Good, so let’s check that off. Next!

McCullen also argued that prior to the 2007 buffer zone, by simply not being allowed on the private property (including the parking lot) owned by the Planned Parenthood where she frequently sidewalk counseled women, she already “appeared suspicious and untrustworthy.” This inconvenience of not being able to follow these women, known to many as “trespassing,” would force McCullen to do things like raise her voice, and the good Lord knows that it’s rude to yell at people as you convince them to raise their unwanted child. Thankfully, McCullen has convinced 80 (probably extremely happy) women to keep their unborn children since the buffer was enacted. But 80 isn’t enough!!

That whole trespassing, buffer zone thing isn’t the only obstacle. Sometimes it’s difficult for McCullen to even tell who is just a random pedestrian and who is in need of some serious saving!! And that doesn’t always leave her with enough time to “initiate a conversation” with these women before they are in the buffer zone. The horror.

Since SCOTUS recognizes that in the case of convincing someone to not have an abortion right in front of the clinic, one on one conversation is most effective, it’s really important that McCullen isn’t so restricted.

SCOTUS points out other states and cities have laws that kind of get to the point that Massachusetts was trying to get to, like NYC’s anti-harassment ordinance. This pretty much sums up how Massachussets really f’ed up:

According to respondents, this history shows that Massachusetts has tried less restrictive alternatives to the buffer zons, to no avail. We cannot accept that contention. Although respondents claim that Massachusetts ‘tried other laws already on the books,’ they identity not a single prosecution brought under those laws within at least the last 17 years….in short the Commonwealth has not shown that it seriously undertook to address the problem with less intrusive tools readily available to it….it is not enough for Massachusetts simply to say that other approaches have not worked.

So there you go. Apparently witnesses said it was just “easier” to do things this way and basically sounded super lazy. Um, hello? If you really want to get shit done, you follow the red tape procedure. I dropped out of college with no degree and I know this, what do these politicians and lobbyists do all day? Make an example out of a protestor, feebly try something else….don’t just sit around and go “derrr it’s all we could do!!” Surely, you had someone who wasn’t a grandmother like McCullen spit on a patient, push an employee – anything, anything that could have been prosecuted and then cited in court to discredit the grandma angle!!! This decision was largely linked to the idea of counseling and one on one conversations, so what happens when there’s a mass shooting or fight in front of a clinic and they wish to create a buffer zone? SCOTUS doesn’t say when that’s acceptable or how many feet a buffer can consist of.

It’s now almost 10:00 pm on a freaking Friday, so later this weekend I’ll wrap up with why I think the end of the majority opinion is wrong, the shitshow that is the dissenting opinion, and my thoughts on Hill v. Colorado. 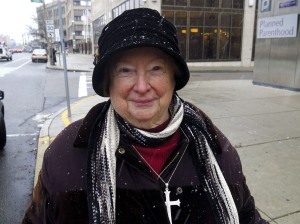