Bad news, bitches: we’ve all been doing drinking wrong. As in we’ve been doing it, and we shouldn’t be. At this point, I assume everyone has seen the CDC’s handy little infographic that alerts women to the dangers of drinking — but just in case, here it is: 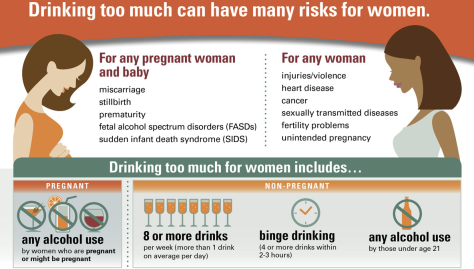 Say what you will about this, I find the suggestion that drinking too much can cause women to become violent particularly helpful. Drunk women are always just being so aggressive and violent! Like, way more than men! It’s about time someone pointed that out!

Honestly, I’m a little baffled by the notion that alcohol causes pregnancy and fertility problems. Is the number one fertility problem caused by alcohol immaculate conception, or is the CDC suggesting that women are to blame if they are raped while drunk? Most likely it’s that drunk women are prone to be violent aggressors who will rape men. I’m so glad the CDC is here to put a stop to that.

And isn’t it enough that I am already totally shafted in the workplace and life in general by not being a man? Now I have to learn that men can drink without risk of being violent, getting STDS, unintentionally knocking someone up, or getting heart disease or cancer? I mean what the fuck. Why did the CDC wait so long to alert us to the fact that women obviously metabolize alcohol in a much more dangerous way than men?

I really need a man to explain this to me. Like, I don’t ever want to be pregnant. So should I drink more so I have fertility problems? Or should I drink less so I don’t accidentally get pregnant? Do I still have access to abortion clinics, or is “unintended pregnancy” now an incurable disease?

Maybe it’s time we really reconsidered how we behave when we’re out. Do you know how many men have bought me a drink in a bar? A fucking ton of them. Do you know how many of them have asked to touch the Implanon stick in my arm before allowing me to drink their beverage? None! When will society change? When will men step up to the plate and take responsibility, and make sure that women of child bearing age are not drinking if they can’t prove they are on birth control? Will our next GOP President please create a law requiring proof of birth control in bars?

For whatever reason, the CDC took this image down. I don’t really know why, I think it’s great. Hopefully they are just working hard so they can re-release it with better suggestions. Honestly, let’s just go ahead and determine that women of childbearing age are that way because they are supposed to have children — so ban drinking for anyone 21-35 until they’ve had at least 2 kids. No more Fetal Alcohol Syndrome, no more violent drunks!